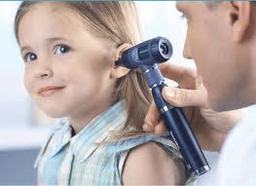 Acute otitis media (AOM) is one of the most common reasons for severe pain in infants and children .

Because otitis media is often caused by a virus, the majority of children with the condition will get better regardless of whether they take antibiotics or not. (Antibiotics are only effective against bacterial infections, and do not have any effect on viruses.)

These days, it is often suggested that children over 6 months of age should initially be treated with pain relief alone. This involves pain relievers being given for 48 hours, and antibiotics only then being given if symptoms persist.Pain relievers,such as paracetamol or ibuprofen are commonly used. Babies and toddlers may suffer intense ear pain and usually have a fever. There may also be vomiting, loss of appetite, decrease in energy and activity and some loss of hearing. In some cases pus will break through the eardrum and present as a discharge from the ear. The child feels better when the ear discharges as the painful pressure is gone. The burst eardrum usually heals on its own however you should see your GP for Ciloxin Ears drops to treat the infection/pus.

Generally Antibiotics (click on antibiotics for the link) are only recommended for children with middle ear infections who:


Of course, if you are worried that your child is not improving, you should see your doctor.
the link for the information above is:
http://www.mydr.com.au/kids-teens-health/otitis-media-in-children

Many cases of middle ear infection in children clear up on their own, without antibiotics, over a few days. In some cases a short course of antibiotics may be prescribed, particularly if the child is very young or very unwell.

Antibiotics are not required every time the doctor notices a child has a red ear.
Middle ear infections often occur as part of a ‘cold’ (sometimes called an upper respiratory infection) with a runny nose and sore throat.

If kids are prescribed antibiotics:

• They must keep taking their antibiotics until completely finished, even if they seem better after just a few doses.

• It is very important that they take all of the antibiotics otherwise the medicine will not work properly. 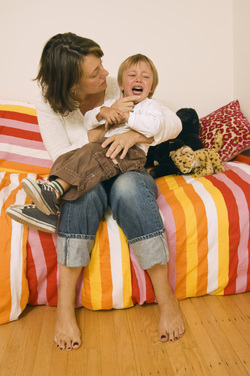 Recovery from an ear infection

Following an ear infection, children may have some fluid in the middle ear for a few weeks. You may notice your child has some trouble hearing during this time.

This fluid will usually clear up by itself over a couple of months.

If you think the fluid might be persisting (eg child irritable or not hearing well and or have speech problems) and these symptoms persist for longer than 3 months then you should consult your doctor.

Otitis Media affects a childs speech, behaviour and learning. Dont leave it too long before seeking help. Start with regular hearing tests every school holidays. You will need to book well in advance for a test at your local Community Health.


Referral to an Ear Specialist.

An ENT (Ear Nose Throat Specialist) surgeon may suggest further treatment, such as an operation, to fix your childs ears. Generally the surgery will be a very simple proceedure to insert grommets. They are also called "Tympanostomy tubes".

Grommets are tiny plastic ventilation tubes that are flanged at the end. They are inserted into the eardrum, to equalise pressure in the ear.
This simple surgical procedure involves making a small cut in the eardrum to remove the fluid from the middle ear and enable the middle ear to 'breathe'. This is done under a general anaesthetic. A grommet allows air to enter the middle ear. The grommet does the work that the poorly functioning Eustachian tube should be doing, giving the middle ear a chance to recover.

Grommets cause no discomfort while in place. The healing ability of the eardrum is so great that it usually pushes the tube out in 6 to 12 months, leaving the drum intact. Grommets are naturally expelled with the growth of the eardrum.

Some children may need their grommets replaced if they continue to get glue ear after the grommets have fallen out. This is common, up to 1 in 3 children, especially younger children.